The Stones put it this way: “It’s only rock and roll, but I like it.”

But, I love Leonard Cohen.

The late Leonard Cohen had been a latecomer to the world of popular music. He didn’t release his first album until he was in his early thirties — which, in the world of rock music, is already old.

By 1973, shortly before his fortieth birthday, Leonard was depressed. He had enjoyed artistic and critical success, but he believed that he was washed up, that his career was over.

He was living on the Greek island of Hydra, with his lover, Suzanne, and their son, Adam. On Yom Kippur, 1973, he heard that war had broken out in Israel, and he got on a boat and then on a plane, and he went to Israel. He knew that he had to be there.

He wound up sitting in a cafe in Tel Aviv. A musician recognized him, and invited him to come to Sinai to spend time with the members of the Israel Defense Forces.

Thus emerged the most famous unknown concert “tour” in the history of rock music.  The tour was not unacknowledged, but it was certainly under-acknowledged. There have been numerous biographies of Leonard Cohen, but this incident in his life has gotten remarkably little attention.

So, yes, Leonard went to the Sinai, and spent time with the troops. There is that famous photograph of him, with General (and future Prime Minister) Ariel Sharon on his left, and the iconic Israeli pop singer, Matti Caspi, on his right. 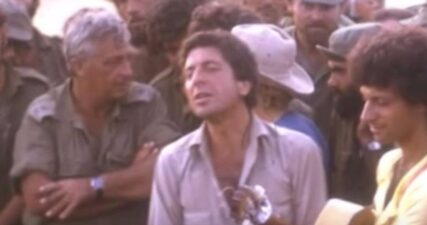 That is why Matti Friedman’s new book, Who By Fire: Leonard Cohen in the Sinai, is indispensable — to Leonard Cohen fans, and to those who love Israel. It is a lyrical, beautiful tribute to one of the quintessential singer-songwriters of our time, and one of world Jewry’s most profound voices. It is also one of Israel’s most important, though relatively unknown, stories.

Check out this Hartman Institute podcast with Matti.

Matti writes about the moment that Leonard arrives in the Sinai:

Some of the men on the sand look up at the visitor with his guitar. Others look down at their dirty knees and boots. Cigarettes glow in the dark. The heat has broken and the desert is still for now. They’ve been fighting for fourteen days and no one knows how many days are left, or how many of them will be left when it’s over…

The visitor, dressed in khaki, is Leonard Cohen. Cohen is 39. He’s been brought low, and thinks he’s finished… He might have come to this country and this war looking for some desperate way out of his dead end, a way to transcend everything and sing again. If that’s what he was looking for, he seems to have found it…

Leonard sang for the soldiers:

“This song is one that should be heard at home, in a warm room with a drink and a woman you love,” he says. “I hope you all find yourselves in that situation soon.” He plays “Suzanne.” The men are quiet. They hear about a place that doesn’t have blackened tanks and figures lying still in charred coveralls. “They’re listening to his music,” writes the reporter, “but who knows where their thoughts are wandering.”

This was not a concert tour. It was a journey — an outward journey, and an inward journey.

Or, let’s put it this way. There is that old Zionist folk song: Anu banu artza….”We have come to the Land, to build and to be re-built by it.”

That was the deal. Leonard came to the Land to build — perhaps not in the old, classic, clear the swamps Zionist way. He came to build strength for the soldiers.

And in return, Leonard was re-built by his journey to the Land.

Some of Leonard’s best (and most Jewish) songs came out of this tour: “Who By Fire,” and “Lover Lover Lover” among them. He experienced a resurge in creativity and productivity — producing a new album, New Skin for the Old Ceremony.

More than this: Leonard’s experience in the Sinai led him into spiritual renewal. He started producing books of poems with titles that sounded like sacred texts — The Book of Mercy (which I bought in Hebrew translation yesterday in Jerusalem — and yes, it reads like a traditional Jewish siddur) and The Book of Longing. These are the work of a modern psalmist — who went to the Sinai peninsula, and who experienced that journey as if it were the journey to Sinai — the mountain of revelation — itself.

Why? Because Leonard Cohen never failed in his responsibility to his people. He was ever the son of the Montreal Orthodox community. He was not only Leonard, but Eliezer. He could become a Buddhist monk, but he was always the descendant of the ancient Israelite priests, a kohen. He could bring an audience to its feet, even into advanced age — fifteen years after typical retirement age — and at the end of the concert, he would lovingly exercise his ancient priestly privilege and bless the crowd: “May the Lord bless you and keep you.” And/or: he would end with the biblical Ruth’s words to Naomi: “Wherever you go, I will go…”  When he played in Israel, he would end with a prayer for healing for both Israeli and Palestinians who had been wounded — both physically and spiritually.

There was yet another lesson of Leonard’s Jewish identity. Other rock stars could imagine that the world was Woodstock.

As a loyal Jew, Leonard never had the luxury of that fantasy.

Years before that moment, Leonard wrote these words in his grandfather’s voice — his maternal grandfather, I assume, the grammarian Rabbi Solomon Klonitksy-Kline:

“Lines From My Grandfather’s Journal”

Soldiers in close formation. Paratroopers in a white Tel Aviv street. Who dares disdain an answer to the ovens? Any answer. I did not like to see the young men stunted in the Polish ghetto. Their curved backs were not beautiful. Forgive me, it gives me no pleasure to see them in uniform. I do not thrill to the sight of Jewish battalions. But there is only one choice between ghettos and battalions, between whips and the weariest patriotic arrogance.

But, it is a necessary vulgarity. Leonard knew that, because for Jews as for others, the world is not yet Woodstock.

One last piece of rock trivia.

Every Saturday night, the official radio station of the IDF plays Leonard’s most famous song, “Hallelujah.”

That is their way, to this day, of saying “todah rabbah.”