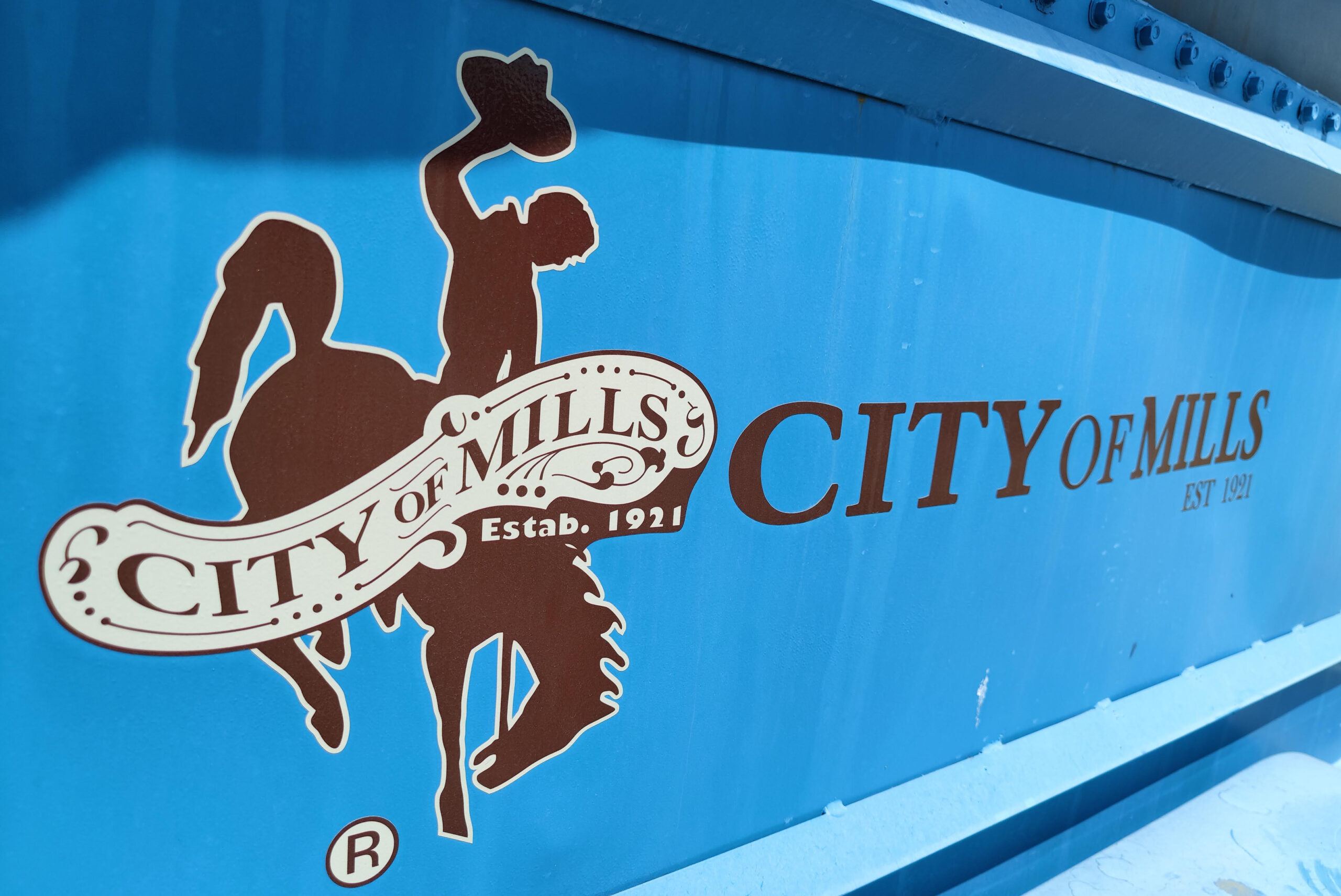 City of Mills logo on the dunk tank at the Mills Summer Fest on Saturday, July 9, 2022. (Klark Byrd/Oil City News)

CASPER, Wyo. — Mills City Council read two ordinances for the third and final time at their regular meeting Tuesday, allowing them to pass.

Ordinance 784 will allow the city to address residential lots used principally for storage by absent property owners. In previous work sessions and meetings, the council has acknowledged complaints referring to the unsightly nature of these lots for neighbors and passers-by, in addition to their ability to become a fire hazard.

The other ordinance, Ordinance 783, allows the city to address nuisance lighting, or lighting that is disruptive or disturbing to property owners. This issue can occur between two residential neighbors — wherein the violation of municipal code could be used as a standard in a civil court case, were an issue to make it that far — but the ordinance also addresses property owners taking issue with lighting on industrial or commercial buildings near their houses.

John Gudger has been vocal at meetings where this ordinance is discussed, having both a background in architecture and a personal history with nuisance lighting. “The issue with the lighting on the mini storage was a real big issue with my wife, because she is legally blind without contacts, and she is very light-sensitive,” he said at the work session Tuesday. He mentioned that the council was able to get the facility to shield its lower lights, but that it has yet to shield the upper ones.

With the ordinance in place, Mills’s code enforcement department would be able to issue nuisance lighting citations after receiving complaints and investigating them. However, some present expressed concerns that this ability doesn’t have “teeth,” as the accused property owners could challenge the claims quite easily with other witnesses.

In response to this, city attorney Pat Holscher explained that civil law, which neighbor-to-neighbor disputes would fall under, “has a lot more in the way of remedies that are generally not addressed by municipal codes.”

Nuisance lighting can also sometimes be a zoning issue, as there isn’t always a requirement for a buffer between industrial/commercial and residential areas. The council plans to address this.

Additionally, once a person or business obtains a building permit, very little can be done by the city to edit plans for lighting. Many buildings are also “grandfathered” into the building codes that existed when they received their initial building permit. To manage this, Gudger suggested more proactivity and communication from the city’s planning and zoning commission. Specifically, they could reach out to any residential property owners within a certain distance of planned construction, and ask for their concerns or input.

Now that Ordinances 783 and 784 have passed, the city will codify them and make them digitally available on their website, allowing the public to view them freely and give them any input. The council also plans to revisit much of their planning and zoning code’s phrasing. “The idea was to get this done, and then we could go back and read it and develop a lot of that,” said Councilman Brad Neumiller.

An updated code could help to solve some of the nuisance lighting issues, as it can address things like buffers and landscaping requirements. “We do need to bring a lot of that up to date,” Neumiller continued. “A lot of that is still from the 50s and 60s, it’s out of date on the surveying end of it.”