(RNS) — After the reforms laid out by Pope Francis are fully implemented, the Vatican Curia will never be the same. His recent predecessors talked about reforming the Curia, but compared with Francis they were simply rearranging deck chairs.

Francis’ changes, most laid out in his March 19 apostolic constitution “Praedicate Evangelium” (“Preach the Gospel”), are the most dramatic made to church governance since Pope Paul VI, who, in 1965, established the synod of bishops to advise the pope. This innovation never lived up to its potential because synodal bishops were forced to defer to curial cardinals. Only under Francis have the synodal fathers been freed to speak boldly.

Paul also reformed the papal election process by increasing the number of cardinal electors to 120 and barring cardinals over 80 years of age from participating in papal conclaves. He also required curial cardinals to submit their resignations when they reached 75.

The reforms of Francis are equally dramatic.

He has opened almost all Vatican offices to lay leadership, including heads of dicasteries (formerly called congregations). This means that the even the Dicastery for Bishops, which recommends candidates for the episcopacy around the world, can now be headed by a nun. The head of the Dicastery for Doctrine of the Faith could be a woman theologian. Even the secretary of state, the highest Vatican official under the pope, could be a layperson.

RELATED: Four things to look for in Francis’ reform of curia

Needless to say, these lay people cannot be chosen from people on the street. They need the theological, diplomatic, legal or administrative training and experience required for the positions — no easy hires, especially if the Vatican cannot offer competitive salaries. Besides having the necessary formation, clerics and religious are cheaper. 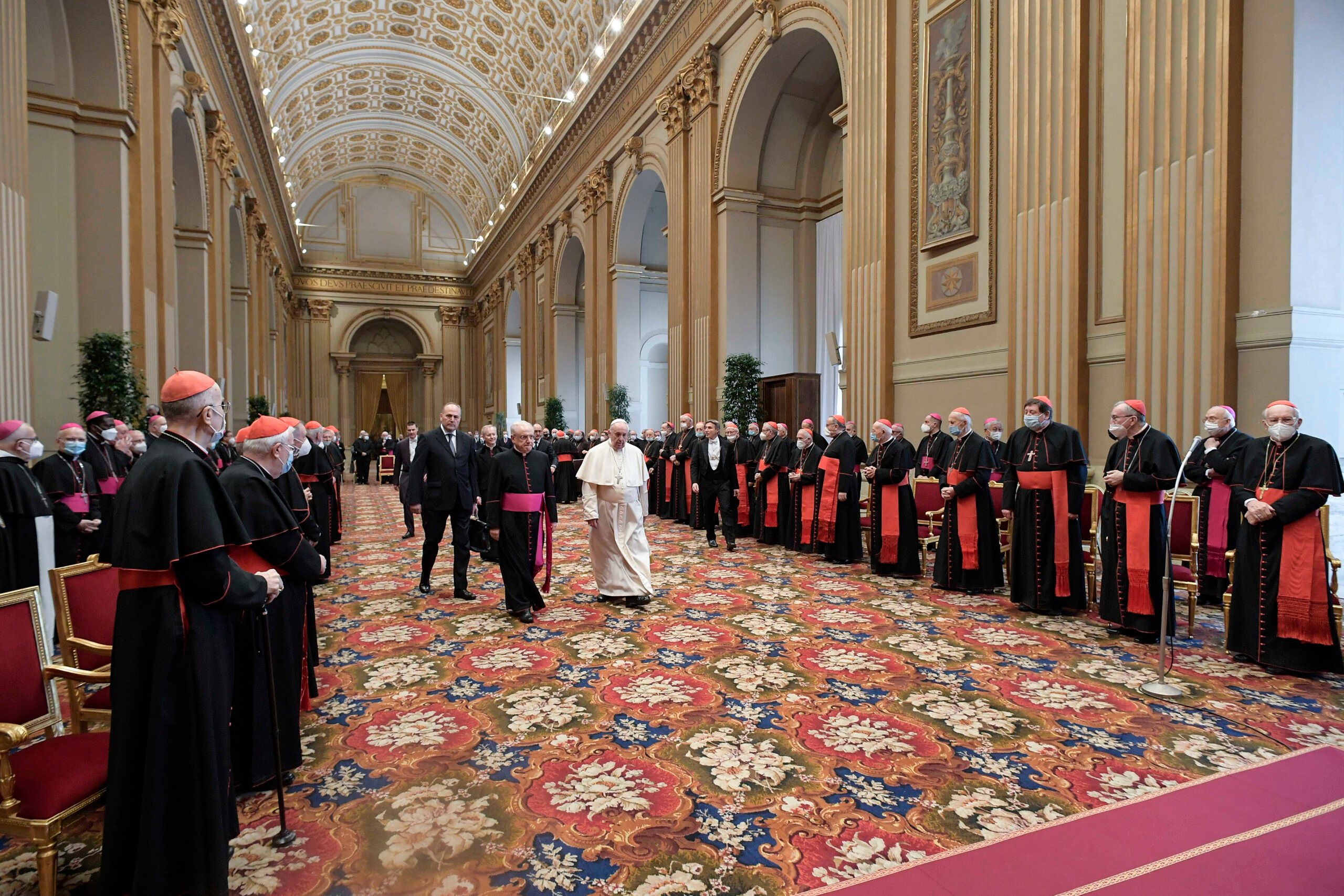 Pope Francis arrives for an audience for the annual exchange of Christmas greetings with members of the Roman Curia in the Apostolic Palace at the Vatican, Dec. 23, 2021. Photo by Vatican Media

Francis sees the role of the Curia in a totally different way from earlier popes. “The Roman Curia is not set between the Pope and the Bishops, but is at the service of both, according to the modalities proper to the nature of each,” according to the apostolic constitution.

In other words, the Curia is staff, not part of the chain of command. It is more like civil service than a governing elite.

This is revolutionary. It moves the papacy away from its monarchical model, in which the pope is king with cardinals and bishops as princes and nobles, to a collegial model put forth by the Second Vatican Council. Francis wants to enhance the potential of episcopal conferences, not denigrate them, as did John Paul and Benedict.

However, the “Praedicate Evangelium” reflects the intentional ambiguity of Vatican II, which promoted collegiality also sought to preserve the absolute power of the papacy. Francis’ constitution cites Vatican II in stating that the pope, “in exercising his supreme, full and immediate authority over the universal Church, employs the various departments of the Roman Curia, which act in his name and by his authority for the good of the Churches and in the service of the sacred pastors.”

In the end, the Curia will be only as collegial as future popes want it to be. We have already seen Francis exhibit a willingness to directly intervene in dioceses where a bishop has not protected children or otherwise failed in his duties. The proper balance between papal authority and collegiality is an art that is difficult if not impossible to legislate.

Much of “Praedicate Evangelium” simply codifies reforms Francis has incrementally put in place since his election. Most important is the Secretariat for the Economy, the Vatican’s new financial cop created in 2010, which “exercises monitoring and vigilance in administrative, economic and financial matters with regard to curial institutions, offices and other institutions associated with the Holy See.”

The financial scandals that have racked the Vatican convinced the pope of the need to have this office, which has the power to monitor the budget, spending and investments of all the Vatican offices, including the Secretariat of State. It also prepares the annual budget and establishes guidelines for purchasing. Pope Francis talks during an audience for Christmas greetings to the Curia in the Clementina Hall at the Vatican on December 22, 2014. (AP Photo/Andreas Solaro, Pool)

The first appointee as Secretary for the Economy, Cardinal George Pell, encountered stiff opposition from the Curia and eventually had to resign to deal with his own legal problems in Australia. The current secretary, the Rev. Juan Antonio Guerrero Alves, is a Jesuit and a trained economist with administrative experience running his order’s major institutions in Rome.

The Secretariat for the Economy operates under the Council for the Economy, consisting of eight cardinals or bishops and seven lay people, chosen by the pope for five-year terms and charged with following “best practices recognized internationally in the field of public administration and striving for an administrative and financial management that is both ethical and efficient.”

Best practices for the Vatican, as in Italy, are not what they are in other places. It is difficult to fire anyone. The Vatican communications, for instance, centered in print and radio media, had a difficult time adjusting to the digital media environment. Rupert Murdoch can ruthlessly fire employees, but the Vatican cannot. Professional development and retraining of employees needs to be strengthened in the Vatican.

In addition, clergy and religious, unlike laity, are supposed to leave the Curia after five years, to discourage careerism. But this also makes it difficult to maintain an experienced professional staff. (Luckily, exceptions can be made.)

Much has been made in the press about the supposed equality of all dicasteries. It is inevitable, however, that some dicasteries will be more equal than others. Major conflicts of competencies — fights over who gets to decide what — are to be submitted to the Supreme Tribunal of the Apostolic Signatura, but still, someone must bang heads together and mediate disputes over policy.

The new constitution gives to the sostituto responsibility for “fostering cooperation among the Dicasteries, agencies and offices without prejudice to their autonomy,” but gives the Dicastery of the Doctrine of the Faith the right to review documents “through a process of discussion and mutual understanding will help in making appropriate decisions.” 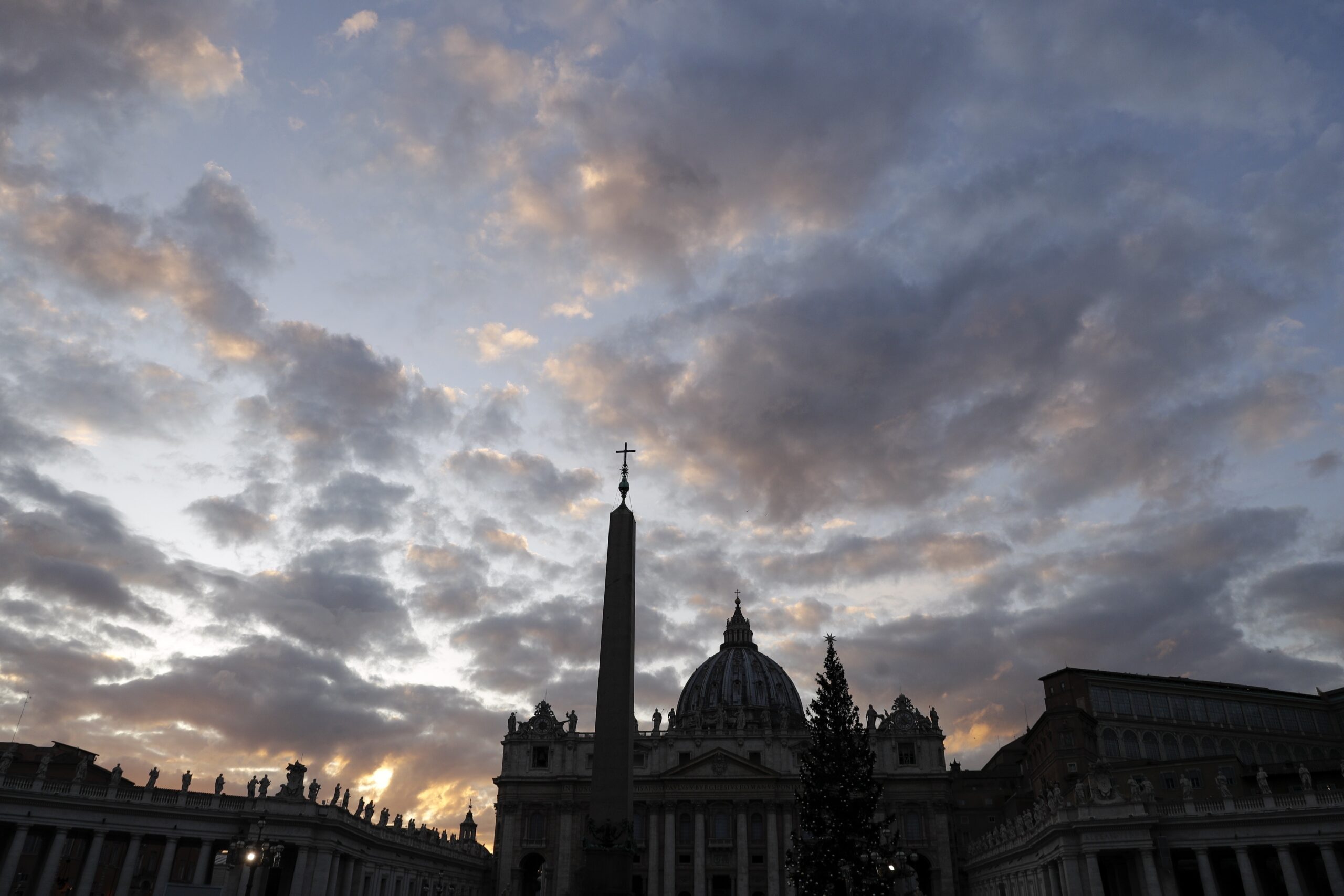 The sun sets behind St. Peter’s Basilica, at the Vatican, Dec. 5, 2019. The Vatican’s sprawling financial trial may not have produced any convictions yet or any new smoking guns. But recent testimony in May 2022 has provided plenty of insights into how the Vatican operates. (AP Photo/Gregorio Borgia, File)

One major flaw of the new constitution is that it does not rationalize the disciplinary functions of the Curia. The Vatican needs a department of justice to investigate and prosecute ecclesiastical crimes, including heresy, sex abuse and financial crimes, especially those committed by a bishop or Vatican official.

This office would ideally employ lawyers to present its findings to independent tribunals, who would pass judgement. It’s a violation of due process to have investigators double as the judges.

Francis has made great strides forward in the reform of the Curia as called for by Vatican II and the cardinals who elected him. These reforms need to be implemented and that will take time.

In addition, new circumstances will require new structures; new popes will have different priorities. New ways of operating in the secular world will provide ideas on how to improve church governance.

Like the church, the Curia is semper reformanda — always in need of reform.

What Biden’s new deal for Venezuelans means for other refugees