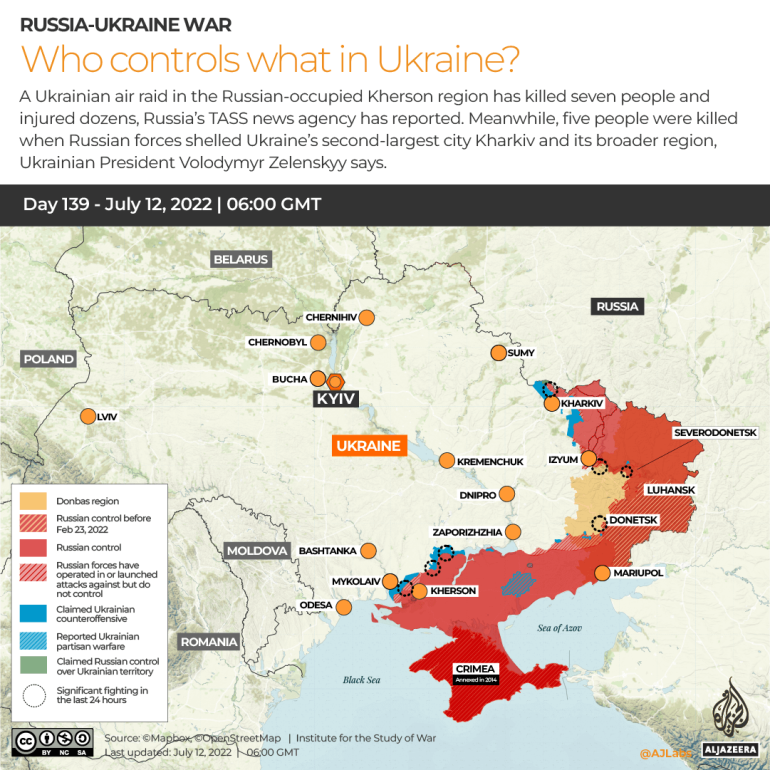 Here are the latest updates:

The death toll after a Russian missile strike on the town of Chasiv Yar has increased to 45, Ukraine’s State Emergency Service has reported.

The United Kingdom’s Trade Remedies Authority (TRA) has proposed dropping anti-dumping measures on Chinese reinforcement steel, saying more imports were needed to meet a fall in supply from other countries because of the war in Ukraine.

The measures have been in place since 2016, but the TRA said maintaining them would not be in the UK’s economic interests given high demand for the steel from its construction sector, and a fall in supply from Russia, Belarus and Ukraine.

The three countries supplied 27 percent of the UK’s imports of Rebar reinforcing steel in 2020-21, the TRA said, and this would likely drop substantially as a result of Russia’s invasion of Ukraine and the UK’s subsequent sanctions against Russia and Belarus.

“Our judgement is that the impact on the British economy of higher prices would significantly outweigh the impact on the sole UK producer of rebar of removing tariffs on Chinese imports,” said TRA Chief Executive Oliver Griffiths.

US concerned critical minerals vulnerable to manipulation amid war

The US energy secretary has said the government is concerned that supplies of critical minerals, used widely in clean energy technology, could be subject to weaponisation the way oil and gas have been amid the Ukraine conflict.

“Our concern is that critical minerals could be as subject or vulnerable to manipulation as we’ve seen in other areas, or weaponisation,” Jennifer Granholm said at the start of talks with Australia’s resources minister and executives from 14 mining companies at the Sydney Energy Forum.

LeBron critical of US efforts to get Griner home

US basketball player LeBron James is publicly criticising America’s handling of WNBA All-Star Brittney Griner’s case in a trailer for an upcoming episode of his television show: “The Shop: Uninterrupted.”

“Now, how can she feel like America has her back?” James said in the trailer. “I would be feeling like, ‘Do I even wanna go back to America?’”

It’s unclear when the show was filmed, although in the trailer it is mentioned that Griner had been in Russia for more than 110 days, which would have been nearly five weeks ago as she was detained on February 17.

Griner is on trial in Russia for drug possession. She pleaded guilty last week and will appear again in court on Thursday. Washington hasn’t disclosed its strategy in the case and the US may have little leverage with Moscow because of strong animosity over its actions in Ukraine.

Brazil wants to buy a lot of diesel from Russia: Minister

Brazil’s foreign minister has said his country wants to buy as much diesel fuel as it can from Russia following a deal with Moscow.

Carlos França called Russia “a strategic partner” and said Brazil is in short supply of diesel.

“Of course, we have to make sure that we have enough diesel for the Brazilian agribusiness and, of course, for Brazilian drivers,” he said. “So that’s why we were looking … for very reliable suppliers of diesel and Russia is one of them.”

The minister was responding to a question about President Jair Bolsonaro’s comments on Monday in Brasilia that Brazil has “a deal” and Russian diesel “can start getting here within 60 days.” Earlier, the president told supporters that Brazil was about to get “cheaper” diesel from Russia.

Military delegations from Ukraine, Russia and Turkey will meet United Nations officials in Istanbul on Wednesday to discuss a possible deal to resume safe exports of Ukraine’s grain from the major Black Sea port of Odesa, as a global food crisis worsens.

Turkish Defence Minister Hulusi Akar announced the meeting on Tuesday. Turkey has been working with the UN to broker a deal after Russia’s invasion stoked global prices for grains, cooking oils, fuel and fertiliser.

According to diplomats, elements of the plan being discussed include Ukrainian vessels guiding grain ships in and out through mined port waters; Russia agreeing to a truce while shipments move; and Turkey – supported by the UN – inspecting ships to allay Russian fears of weapons smuggling.

“We are working hard indeed but there is still a way to go,” UN Secretary-General Antonio Guterres told reporters. “Many people are talking about it. We prefer to try to do it.”

Ukraine President Volodymyr Zelenskyy was quiet on Tuesday about the reported air raid by Ukrainian forces on Nova Kakhovka, in Russia-occupied Kherson, which a Moscow-backed official claimed killed at least seven civilians and injured dozens more.

In his nighttime speech to the nation, which usually addresses the main news of the day, Zelenskyy drew attention to attacks inflicted on Ukraine by Russian forces.

“Every day we receive and experience a lot of painful news. The war continues, Russian shelling does not stop for a single day. Today there were regular strikes at Mykolaiv – missiles, artillery. The occupiers once again hit Kharkiv and the communities of the region … There are victims – wounded and killed,” he said. “In Donbas, offensive attempts do not stop, the situation there does not get easier, and the losses do not get smaller.”

The self-styled Donetsk People’s Republic (DPR) on Tuesday opened an embassy in Russia, one of only two countries to recognise the separatist “statelet” in eastern Ukraine, and defended its right to impose capital punishment.

The DPR’s self-proclaimed foreign minister Natalia Nikonorova said the territory’s use of the death penalty – which it has handed down to two Britons and a Moroccan for fighting as “mercenaries” for Ukraine – was irrelevant to its bid for diplomatic recognition.

Asked if capital punishment would tarnish the DPR’s image, she said: “We consider that mercenary activity is indeed a terrible crime because people, for a reward, come to another country to kill other people, despite having no personal goals connected to the conflict in question.”

“Yes, it is the highest measure of punishment, but it is in our legislation and it is not linked to the further process of recognition of the Donetsk People’s Republic by other states.”

Ukraine braces for new Russian offensive in the east

Ukraine is bracing itself for what it expects to be a massive new Russian offensive in the east of the country where Moscow says it is determined to take control of all of the industrial Donbas region.

Russian forces, which earlier this month completed the capture of Luhansk province in the Donbas, have for weeks been shelling parts of neighbouring Donetsk.

Regional Donetsk Governor Pavlo Kyrylenko said there was a significant buildup of Russian troops, particularly in the Bakhmut and Siversk areas, and around Sloviansk and Kramatorsk. The entire front line in the region was under constant shelling as Russian troops tried to break through but were being repelled, he said.

He also said a Russian air raid destroyed Bakhmut stadium, used as a training facility for Ukraine’s Olympic athletes before the war.

Read the updates from July 12 here.