(The Conversation) — Each July 24, the state of Utah celebrates “Pioneer Day.” There are parades, rodeos, fireworks, a marathon, hikes and historical outfits, plus lots of red, white and blue – similar to the Fourth of July and other patriotic events in America.

Pioneer Day, however, commemorates something unique: the day Mormon migrants arrived in the Salt Lake Valley. The label “Mormon” refers to any church rooted in the teachings of founder Joseph Smith, although the largest of these, The Church of Jesus Christ of Latter-day Saints, has rejected the name in recent years.

The first Latter-day Saints to reach Utah had fled Illinois, more than 1,000 miles away. On July 24, 1847, after months on the trail, church president Brigham Young caught sight of the valley and proclaimed, “This is the right place.”

For Latter-day Saints, the holiday involves church activities like talks, dances, potlucks and sometimes reenacting pioneers’ experiences by walking along the “Mormon Trail” with handcarts. In Salt Lake City, there is a large parade called “Days of ‘47” with floats reflecting an annual theme related to pioneers.

As a historian who studies Mormon migration and immigration, I see the pageantry of Pioneer Day as a reflection of the church’s long, complicated relationships with race, nationalism and identity. Each year’s commemorations emphasize stories of hardship and heroism. However, they remember just one story of migration out of many in the diverse history of the church and the region.

Church on the move

Smith founded the LDS church in upstate New York in 1830. Ever since, its history has been one of movement.

Smith claimed to have received revelations and visions indicating that Latter-day Saints should gather to prepare for Jesus Christ’s Second Coming. The church taught that God would gather his people in a place called Zion – a word found in the Bible, often used to refer to Jerusalem or Israel – before Jesus’ return. By converting people to the LDS church and encouraging them to migrate together, 19th-century Latter-day Saints believed that they were building Zion.

In the faith’s first few decades, the LDS church changed headquarters several times, gathering in New York, then Ohio, then Missouri, then Illinois. Each time, their arrival prompted conflict with local communities that did not trust the new church – discrimination that sometimes broke into violence. After Smith, the founder, was killed by a local mob in 1844, Young led a large faction of Mormons on the long, difficult journey to Utah.

When Latter-day Saints arrived by the Salt Lake in 1847, the area was Mexican territory. The United States gained control of the territory the next year as part of the Treaty of Guadalupe Hidalgo, which ended the Mexican-American War and ceded Western lands to the United States.

It would be another half-century before Utah became a U.S. state, however. The territory was technically under U.S. control, but for the time being, Latter-day Saints celebrated their autonomy. As part of the effort to gather church members together, Young established a micro-loan system that financed converts’ migrations to Utah from both inside and outside the U.S.

Many did not trust the U.S. government, given the church’s previous experiences of discrimination. Nor did many Americans trust the LDS church, partially because of the practice of polygamy – which church leaders formally disavowed around the turn of the 20th century.

Some Americans in the 19th century considered Mormon immigrants to be racially nonwhite, although the vast majority were coming from Europe. Anti-immigrant sentiment was rising at the time, and critics sometimes conflated their fears about Mormon, Chinese and Muslim immigrants.

The U.S. federal government tried to stop Mormon immigration in a number of ways, such as forbidding people who supported polygamy from entering the country in 1891. Even so, hundreds of Latter-day Saints immigrated each year.

Migration stories are a source of pride and identity for many Utahans, and Pioneer Day celebrations have a long history. Within two years of the first Latter-day Saints’ arrival in 1847, they started celebrating the anniversary with cannon salutes, music, bell ringing and speeches.

Later celebrations included reenactments. For the 50th anniversary in 1897, some celebrants reenacted part of the trek along the Mormon Trail and watched a procession of wagons and horse-drawn floats, a tradition that gradually formalized into the Days of ’47 parade. 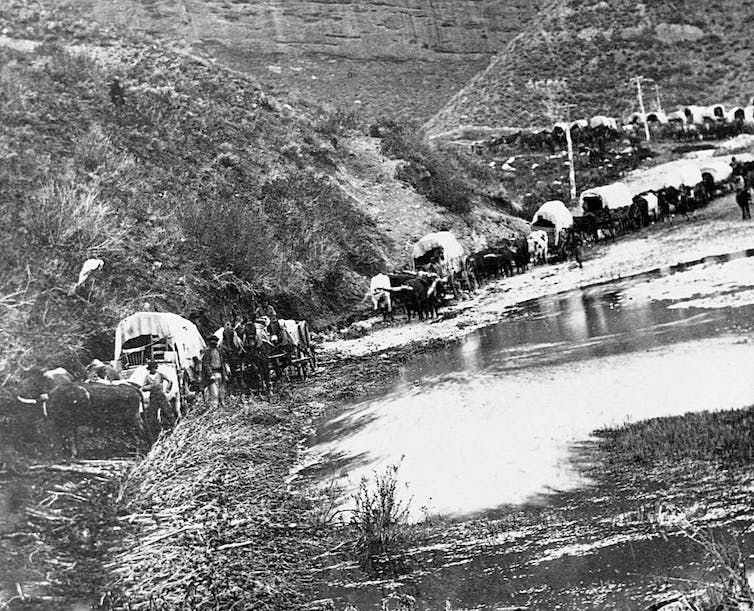 A covered wagon caravan of Mormon emigrants trying to cross a river in 1879.
Corbis Historical via Getty Images

To some, Pioneer Day symbolizes exclusion and forgetting – especially the church’s impact on Native Americans. In a 2019 op-ed, documentary filmmaker Angelo Baca and historian Erika Bsumek wrote that Pioneer Day “represents a key moment in the history of the colonization of the American West,” which caused “Utes, Paiutes, Shoshone, Goshute and Navajos” to lose “their homes, lands, and even, in some cases, their families.”

Pioneer Day is also the anniversary of the arrival of Black people, both enslaved and free, whose experiences have often been overlooked in Utah history. However, monuments and written records have helped spark discussion about how to remember their legacy during the holiday.

As Latter-day Saint membership has grown more globally diverse, Pioneer Day celebrations have included more diverse pioneer narratives from the faith’s history. In recent years, church programs have also emphasized stories of how “pioneers” are building up the faith all around the world, not only in Utah.

As Utah and the church continue to become more diverse, Pioneer Day participants will continue to recover histories of migration, displacement and courage that shape their identity in the present through their remembrances of the past.

(Jeffrey Turner, Ph.D. Candidate in U.S. History, University of Utah. The views expressed in this commentary do not necessarily reflect those of Religion News Service.)

MSG Sphere to Open with U2