Weyerhaeuser (NYSE:WY – Get Rating) was upgraded by StockNews.com from a “hold” rating to a “buy” rating in a research note issued to investors on Tuesday.

Canada is already known as a miner’s paradise. But British Columbia (BC) is quietly becoming the new copper hotspot. That’s because copper is critical to the world’s shift to renewable energy. Biden earmarked $226 billion in new infrastructure projects all requiring copper.

Weyerhaeuser (NYSE:WY – Get Rating) last released its earnings results on Friday, July 29th. The real estate investment trust reported $1.06 earnings per share (EPS) for the quarter, missing analysts’ consensus estimates of $1.08 by ($0.02). The business had revenue of $2.97 billion for the quarter, compared to analyst estimates of $2.83 billion. Weyerhaeuser had a return on equity of 24.49% and a net margin of 23.10%. Weyerhaeuser’s quarterly revenue was down 5.4% compared to the same quarter last year. During the same quarter last year, the company earned $1.37 earnings per share. On average, research analysts expect that Weyerhaeuser will post 3.14 EPS for the current fiscal year.

Weyerhaeuser Company, one of the world’s largest private owners of timberlands, began operations in 1900. We own or control approximately 11 million acres of timberlands in the U.S. and manage additional timberlands under long-term licenses in Canada. We manage these timberlands on a sustainable basis in compliance with internationally recognized forestry standards. 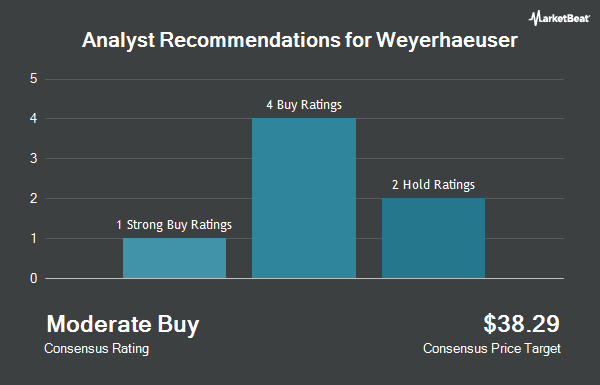 This instant news alert was generated by narrative science technology and financial data from MarketBeat in order to provide readers with the fastest and most accurate reporting. This story was reviewed by MarketBeat’s editorial team prior to publication. Please send any questions or comments about this story to contact@marketbeat.com.

Before you consider Weyerhaeuser, you’ll want to hear this.

MarketBeat keeps track of Wall Street’s top-rated and best performing research analysts and the stocks they recommend to their clients on a daily basis. MarketBeat has identified the five stocks that top analysts are quietly whispering to their clients to buy now before the broader market catches on… and Weyerhaeuser wasn’t on the list.

While Weyerhaeuser currently has a “Moderate Buy” rating among analysts, top-rated analysts believe these five stocks are better buys.

10 of the most expensive states to live in | National