Walter G. Moss is a professor emeritus of history at Eastern Michigan University, a Contributing Editor of HNN, and author of A History of Russia. 2 vols. For a list of his recent books and online publications click here. 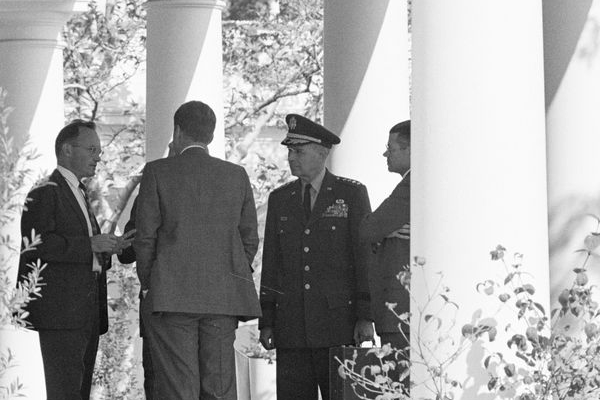 The Russian announcement of the annexation of four Ukrainian provinces and Putin’s speech that same day (September 30, 2022) brought Russia and the U. S. closer to war. Like Western Europe in 1938 confronting Hitler or the U.S. in 1962 dealing with Soviet missiles in Cuba, we have difficult choices to make. In our present tangled and dangerous time, however, one thing seems clear. If President Biden and NATO (collectively the “West”) have a clear and viable plan for ending the Ukrainian war, it is not evident.

To most people “appeasement”–as in British Prime Minister Neville Chamberlain’s caving in to Hitler over annexing part of Czechoslovakia in 1938–is a bad word. And the West clearly does not wish to appease Putin and recognize the Ukrainian annexations that Putin has announced. Nor should it. As the by-no-means hawkish Anatol Lieven has written, “the Russian government’s move . . . to annex the territories it has occupied in Ukraine is absolutely illegal, as well as a very serious escalation of the conflict. The local ‘referendums’ in support of this move were a sham and will quite rightly be condemned by the vast majority of states around the world.”

However, the Ukrainian regaining of all territory lost to Russia in the last decade–especially Crimea, taken in 2014–seems unrealistic. For that to occur, Ukrainian military forces would either have to drive Russian forces out of all areas Russia has gained, including Crimea, or Putin’s Russia, possessing all the nuclear weapons it has, would willingly have to return seized lands without being forced to do so. Given what we know of Putin, the latter scenario seems improbable. So too does it that he will be overthrown or replaced as Russian president. (Ukrainian President Zelensky has said he would negotiate with a new head of state, but not Putin.)

Thus, if the West will not appease Putin by recognizing the annexation of the four Ukrainian provinces seized in 2022 but Putin will not (as Zelensky has insisted) return all lost territory (including Crimea), how will the present stand-off be settled? My suggestion is that we look to the Cuban Missile Crisis of 1962 and the diplomacy of John Kennedy and Nikita Khrushchev.

This suggestion is not original to me. In the Lieven article mentioned above, he brings up the 1962 crisis in connection with the present failure to keep open the “lines of communication” between Russia and the U.S.  He thinks that the “Soviet leadership deployed missiles to Cuba” because “lack of adequate communication led it to believe that this was the only way to deter a U.S. invasion of the island.” Lieven adds that the deployment was “objectively unnecessary and could have been avoided by frank and honest private communications.” Another thing he thinks we could learn from the 1962 crisis is the importance of both sides giving “secret but credible assurances” as President Kennedy did in agreeing “to withdraw U.S. missiles from Turkey in return for the withdrawal of Soviet missiles from Cuba.” Among the present assurances Lieven suggests are that Russia “does not intend to attack any NATO member” and that the U.S.  “will stop short of supporting any Ukrainian offensive aimed at recapturing Crimea.” (President Zelensky, however, has listed the return of Crimea as one of Ukraine’s war aims.)

A week before the annexation announcement, David Ignatius of The Washington Post made an even more direct call to follow the Cuban-Missile-Crisis path to avoiding war. He declared that “leaders must think now with the same combination of toughness and creativity that President John F. Kennedy showed during the Cuban missile crisis in 1962. . . . That means drawing a firm line—Kennedy never wavered on his demand that Soviet missiles be removed from Cuba—but it also means looking for ways to de-escalate.” Without being more specific, Ignatius suggested that Biden seek, as Kennedy did through secret diplomacy and without appeasing, a “face-saving way [for both sides] to avoid the ultimate catastrophe.”

A major problem with looking to the Cuban Missile Crisis for possible clues on how to end the present Ukrainian impasse is the difference between the personalities of Khrushchev and Putin.  And there are other contrasts between a 1962 crisis over Cuba and a 2022 one in Ukraine.  But where Ignatius is undoubtedly correct is that the Biden administration and NATO must demonstrate a “combination of toughness and creativity.” A lack of the first attribute portends another appeasement like that of Chamberlain to Hitler in 1938. A lack of the second quality presages a stumbling into a catastrophic nightmare as Europe did in 1914, an occurrence Kennedy was very mindful of and wished to avoid.

Mindful of the upcoming midterm congressional and state elections, it is unlikely Biden will want to appear lacking toughness, but Kennedy’s Cuban Missile Crisis also occurred in October, shortly before a midterm election. And JFK did not let that deter him from backing away from war even though some military men like Air Force Chief of Staff General Curtis LeMay wished to bomb the Soviet nuclear missile sites in Cuba.

The greater danger is that the West might not be creative enough in responding to Putin’s aggression in Ukraine. For political leaders being creative seems harder than being tough.  In 1968 writer Wendell Berry stated “We have been led to our present shameful behavior in Vietnam by this failure of imagination, this failure to perceive a relation between our ideals and our lives.” In 2010 scholar Michael Brenner criticized President Obama “for this sorry state [in Afghanistan] . . . He is a remarkably conventional thinker who defers to established opinion and persons. He instinctively gives the benefit of all doubts to those who embody a conservative perspective. He lacks the imagination and forcefulness to fashion his own conception of what a situation is.” And if Obama was not as creative and imaginative as we might like, the U.S. Congress was even worse.

Not being a diplomat nor a statesman nor a creative adviser (like President Biden should be able to turn to), I can offer only the most meager of hints as to what type of creative paths the U. S. administration might follow in seeking a solution to end the Ukrainian war that Russia has begun.

In his speech of September 30, Putin said that “today we will sign treaties on the accession of the . . . . four new regions . . . [as] new constituent entities of the Russian Federation. . . . It is undoubtedly their right, an inherent right sealed in Article 1 of the UN Charter, which directly states the principle of equal rights and self-determination of peoples.” Could this statement present a diplomatic opening?

As Lieven recognized, “the local ‘referendums’ in support of this move [accession to Russia] were a sham.” But Putin referred to the UN: what if a new UN-supervised plebiscite on the question of belonging to Ukraine or Russia was held in each of the four regions? [HNN received this submission before Elon Musk made a widely-publicized suggestion on Twitter along similar lines.] Putin and Zelensky have each assured us that a majority of people in each of those areas prefer to belong to the country over which he rules. Why not put those claims to the test? (Crimea might also be added to the plebiscite list.)

One thing that distinguished JFK’s decision regarding the Russian missiles in Cuba is that he received many different proposals from differing political perspectives before reaching a conclusion. Some that seemed pretty good at first were, after more discussion, rejected. So too my plebiscite suggestion, after being discussed, might not seem like such a good idea–even to me. But that’s the value of leaders receiving, and welcoming, many different opinions.

It might be objected that Putin would never allow such plebiscites–nor even an open discussion by his advisers of their advisability–but if not, just the U. S. proposing them and having Putin reject the idea might help the West broaden world opinion against his Ukrainian policies.

In an introduction to a new edition of his The Coming of the New Deal, 1933-1935, Arthur M. Schlesinger Jr. (who in 1962 was also one of JFK’s advisers) wrote that “under the pressure of national crisis [the Great Depression], FDR came into his own. . . . He was more interested in creativity than consensus. He did not mind competition and rivalry within his administration; he rather encouraged it.”

Facing the present crisis over Ukraine, there is still time to avert it from spiraling downward to unimaginable depths. But bold steps are needed. In October 1962, after some errors and miscalculations, JFK took such steps, some (like promising to remove missiles from Turkey) not made public. It is possible that at present the Biden administration is doing more diplomatically than is publicly known to end the war in Ukraine, end it (as Ignatius suggested) with a “combination of toughness and creativity.” Let’s hope so.