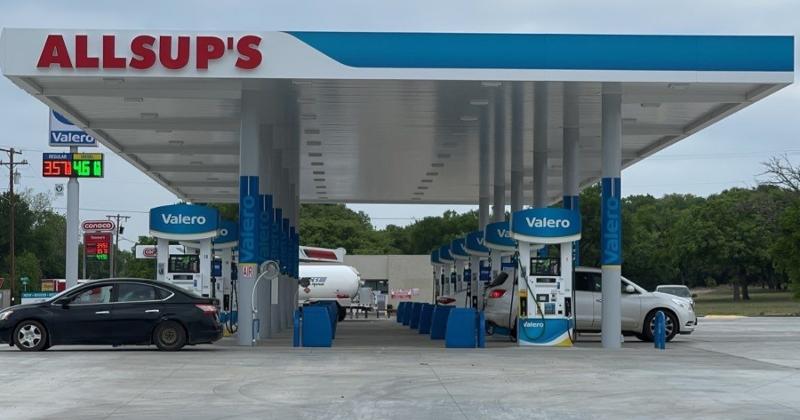 FORT WORTH, Texas — Convenience-store retailer Yesway has expanded its portfolio to a total of 406 stores with the opening of its three latest new-to-industry and relocated Allsup’s-branded locations in Breckenridge, Canyon and Robert Lee, Texas.

These locations represent the latest of the new large-format stores that Yesway has developed and is bringing to market.

The stores each contain 5,630 square feet of merchandising space and have 24 fueling positions, with high-speed diesel fueling lanes also available at the Breckenridge and Canyon locations.

All of the new convenience stores are open 24 hours per day, and customers will find Allsup’s burritos, a full array of Yesway and Allsup’s private-label snacks; Allsup’s bread, milk and eggs; a beer cave; a new trucker and automotive section; and amenities including Western Union service, ATM availability and Coin Cloud digital currency machines offering more than 30 digital currencies.

“Our loyal customers in Texas have shared with us how excited they are that our new, large- format stores have come to their communities,” said Tom Trkla, chairman and CEO of Yesway and among CSP’s 2020 Power 20. “The velocity at which our team has been working to bring these new stores to market is truly inspiring.”

In 2020, the company announced that it had raised an additional $235 million of equity capital, $135 million of which it would invest in targeted real estate capital projects.

Owned by BW Gas & Convenience Holdings and an affiliate of Beverly, Mass.-based real-estate and private-equity investment and asset management company Brookwood Financial Partners, Yesway is a multi-branded platform that acquires, transforms and enhances portfolios of convenience stores by leveraging expertise in real estate and technology and by implementing data-driven decision making. Its portfolio consists of more than 400 convenience stores in Texas, New Mexico, South Dakota, Iowa, Kansas, Missouri, Wyoming, Oklahoma and Nebraska under both the Yesway and Allsup’s c-store brands.

Members help make our journalism possible. Become a CSP member today and unlock exclusive benefits, including unlimited access to all of our content. Sign up here.

Want breaking news at your fingertips?

Get today’s need-to-know convenience industry intelligence. Sign up to receive texts from CSP on news and insights that matter to your brand.

The latest from CSP, sent straight to your inbox.

Thanks for signing up!